The onslaught of Covid-19 shows no signs of relenting. While the infection-death curve has been arrested by some countries, our one is still climbing, as if it wants to put a flag of our collective irresponsibility at a greater summit. The disease data from the same time period of last year is of no help in understanding when a plateau can eventually be reached—partly because we are now dealing with a new variant of the virus during this second wave, whereas some other countries are already dealing with their third wave. The end, therefore, is not in sight.

Thus we have an uphill task at hand. The first challenge, of course, is to survive. We have to have faith in science, maintain social distancing, and wear masks to minimise infections. If we do survive this ordeal, the next challenge will be to adapt to the new reality. A lot has already been said about the post-Covid-19 reality. And all will agree that we cannot return to the world as it was once before. An optimist historian reminds us that after the Black Death in the Middle Age, humans came across the Renaissance, the revolutionary change in the way humans were perceived. Maybe another such revolutionary change is waiting once we turn the corner. 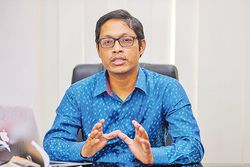 ঢাকা ট্রিবিউন
২৩ ঘণ্টা, ৫৭ মিনিট আগে
We use cookies to ensure you get the best experience on our website.