Trump Heights, Trump Square, Trump train terminal: Israel isn't shy about honouring Donald Trump, who is widely admired among Israelis for his staunch support of their country.  In four years, Trump overturned decades of US policy in the Middle East. Joe Biden will want to undo many of those changes during his presidency, but his freedom for manoeuvre will be limited. 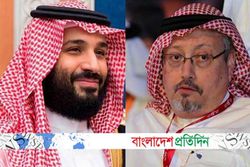 শেয়ার বিজ
৪ ঘণ্টা, ১৮ মিনিট আগে
We use cookies to ensure you get the best experience on our website.