Victorious India and dejected England players took a rest Friday on what should have been the third day of a key five-day clash, with warnings that the speed of the result had tarnished the Test format. New spin hero Axar Patel took 11 wickets in two innings as India cruised to a 10 wicket victory that put them 2-1 up in the series. The win came alongside complaints about the 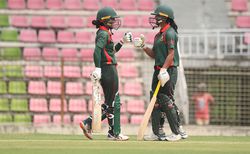 ঢাকা ট্রিবিউন
১ ঘণ্টা, ৩৬ মিনিট আগে
We use cookies to ensure you get the best experience on our website.