Oscar and Academy Award winning actor and producer Sir Thomas Sean Connery is best known for his portrayal of everyone's favourite fictional spy James Bond not one, but seven times on the big screen. The Scottish actor has also been honoured with two BAFTA Awards and three Golden Globes.  The actor passed away in his sleep in his residence in the Bahamas today. He was 90 years 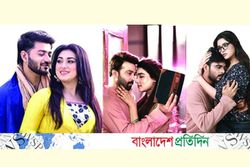 ডেইলি বাংলাদেশ
২ ঘণ্টা, ২২ মিনিট আগে
We use cookies to ensure you get the best experience on our website.