FIFA President Gianni Infantino said on Thursday he is not interested in a European Super League amid reports that some elite clubs were in talks to set up a breakaway competition with the backing of the global soccer body. In an interview published by German-language newspaper Aargauer Zeitung and other regional Swiss media, Infantino said FIFA was focused on the success of 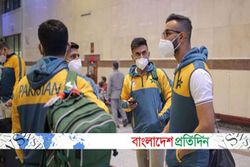 ঢাকা ট্রিবিউন
১ ঘণ্টা, ১৮ মিনিট আগে
We use cookies to ensure you get the best experience on our website.