A Khulna court today sentenced five people to life imprisonment for killing a man in 2013. The court also fined each Tk 20,000, in default of which the convicts will have to serve in jail for another six months, our Khulna correspondent reports. Additional District and Sessions Judge's Court-1 Judge Md Yakub Hossain announced the verdict in presence of the five accused in the 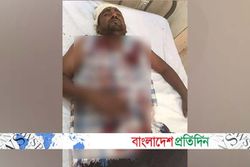 ডেইলি বাংলাদেশ
২ ঘণ্টা, ৩১ মিনিট আগে
We use cookies to ensure you get the best experience on our website.