Impressive performances from Lionel Messi and Ansu Fati helped Barcelona overcome an early red card to defender Clement Lenglet and win 3-0 away at Celta Vigo on Thursday to make it two wins out of two in the new La Liga season. Teenager Fati showed pace and anticipation to nip in between two Celta defenders and fire Barca ahead in the 11th minute, picking up where he left off 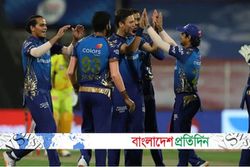 বাংলা ট্রিবিউন
৫ ঘণ্টা, ৪৩ মিনিট আগে
We use cookies to ensure you get the best experience on our website.