At least two people were stabbed on Friday near the former offices of the Charlie Hebdo satirical magazine in Paris that was attacked by Islamist militants over five years ago, in an incident anti-terrorism police were investigating. Paris police said one person had been arrested. France Info radio said a second suspect was also in custody. Prime Minister Jean Castex had 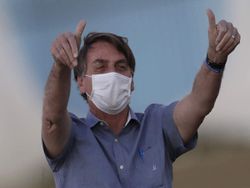 ডেইলি বাংলাদেশ
৩ ঘণ্টা, ২২ মিনিট আগে
We use cookies to ensure you get the best experience on our website.