Lebanon's cabinet on Wednesday declared a two-week state of emergency in Beirut following a massive explosion in the port that rocked the city on Tuesday, and handed control of security in the capital to the military. The cabinet instructed the military to impose house arrest on anyone involved since 2014 in the administration of the warehouse containing vast amounts of 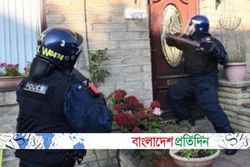 Trump blasted for suggesting he might not honor vote

ডেইলি স্টার
১ ঘণ্টা, ৬ মিনিট আগে
We use cookies to ensure you get the best experience on our website.