Timo Werner revealed Chelsea manager Frank Lampard was the main factor in his choice to join the Blues for next season despite interest from a host of other top European clubs. Werner, 24, scored 34 goals for RB Leipzig in the 2019/20 season but will not be part of the German side's Champions League campaign next month as he has already arrived at Stamford Bridge to prepare 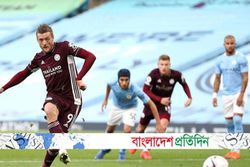 ঢাকা টাইমস
১ ঘণ্টা, ৫২ মিনিট আগে
We use cookies to ensure you get the best experience on our website.